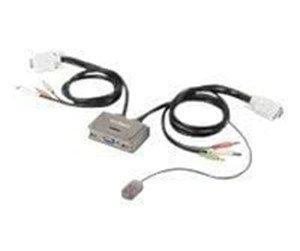 www.edimax.com
The Edimax EK-2U2CA is a compact KVM switch designed specifically for individuals and SOHO users who have to manage two computers in a limited workspace. With 2 combo cables, the Edimax EK-2U2CA allows you to connect a USB keyboard, a USB mouse, a monitor, a microphone, and a pair of speakers to two computers. You can toggle between the two computers with either the QuickSwitch button, via the customizable hotkeys. In addition to USB keyboards and mice, you can also connect USB hubs, flash drives, and other USB devices to either of the USB ports. It also features auto-scan and complete keyboard and mouse emulation for simultaneous PC boot-up. Hot-plugging capability lets you connect and disconnect to and from PCs without needing to power them down.
The Edimax EK-2U2CA will save you money, space, and relieve you from the hassle of needing to purchase additional equipment. You won't need an additional power supply or any software either - you can simply Plug and Play.