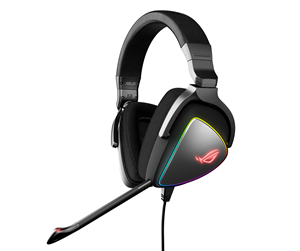 www.asus.com/index.aspx
Adopting USB Type-C allows the ROG Delta to plug in to a broad range of next-gen devices. The reversible jack is easy to connect, while the digital interface carries a pristine audio signal to the headset. Older devices are supported via the included Type-A adapter, which ensures backward compatibility with legacy USB ports. Sound clarity is excellent no matter which source you choose. The ROG Delta uses ESS Sabre silicon capable of pumping out high-definition audio at up to 32 bits and 384 kHz. While most stereo headsets rely on a single DAC, the Delta has four. Each DAC devotes its processing power to a subset of the audible frequency range: lows from 20-150 Hz, mids from 150-5,000 Hz, highs from 5,000-20,000 Hz, and ultra-highs from 20,000-40,000 Hz. The four signals are then combined, which produces clearer sound with an impressive 127-dB SNR that's much higher than typical mobile devices and even high-end motherboards. The quad-DAC array brings to life audio across different kinds of content, and it can even help gamers pinpoint specific sounds and positional cues by reducing background noise. Putting all the DACs in the headset helps achieve such a high SNR. Analog signals are susceptible to degradation, so it's best to keep audio in the digital domain as long as possible and away from interference. In the Delta, digital-to-analog conversions happen at your head, far from the electrical noise around the source devices like laptops and consoles. The Delta employs the same 50-mm Essence drivers as their Strix Fusion series. In concert with the DACs, they immerse you in rich stereo sound. Stereo consumes less power than surround sound, making the headset ideal for smartphones, laptops, and tablets, where sustaining battery life is vital. Most people turn off virtual surround sound anyway, and pro gamers avoid it entirely. The Delta still works with software-based surround sound, including the virtualization built into many games.The ear cushions handsomely combine comfort and performance. They're designed to envelop your ears, locking in sound so you experience the full weight of each audible nuance. Their oval shape and contoured bump at the bottom ensure a close fit for most gamers. To improve acoustic isolation, the interior walls of the cushions are lined with synthetic leather. That can get steamy during intense matches, so the rest is covered by a breathable mesh fabric to stave off sweat. The Delta also comes with a second set of cushions wrapped in synthetic leather throughout, so you're covered for both warm and cool weather. Each cup hangs from an aluminum hinge that's lightweight and strong. The cups are thinner because they don't need to incorporate processing for surround sound, which helps lighten the load on your neck. The clamping force is lighter, too, so the Delta won't squish your head. They spent a lot of time gathering feedback from internal testers, gamers, and esports pros in different regions to determine how tightly headsets should hang on. After compiling data on a wide variety of head shapes, they determined that 515 grams of clamping force is best for most users. That's noticeably lighter than the 700 grams of force of the Strix Fusion family, which is suitable for more violent head-banging.Aura Sync allows you to generate a personalized glow with a range of colors and effects, as well as match the RGB lighting in the headset with compatible components in the rest of your rig. The lighting will be available as a single zone when the Delta launches this summer, but a software update due in the fall will split the RGB LEDs into eight zones to enable more complex customization. Adjusting the Aura lighting is easy with the intuitive Armory 2 desktop application. Once your preferred pattern is programmed, you can enable it by pressing and holding the Aura button on the edge of one cup. That cup also has a volume rocker for quick adjustments. The rocker is more durable than a conventional wheel, which is important for a headset destined for life on the go. Another nice little touch is the LED integrated into the analog microphone. It lights up when the mic is muted, so you can easily see whether you're being heard.