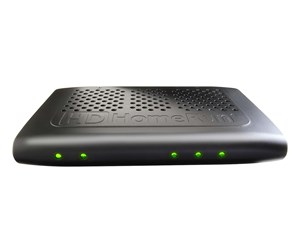 
HDHomeRun - Watch, pause and record HDTV from any computer on your network
It isn't everyday that a new class of device is released. The HDHomeRun (HDHR) is a dual QAM tuner network device and it's about the size of a small hub, has 1 coax input and a Ethernet port. You plug it into your antenna or cable and then into your home network and you can stream HD to any computer on your network and it even streams perfectly via WiFi. The HDHR let's you watch and record all FREE digital TV channels without monthly subscribtion. True FREE TV!

What makes the HDHomeRun different from other tuners?
The HDHomeRun (HDHR) is a network-attached tuner. You simply connect the HDHR to your network switch or router directly instead of needing to connect via USB or PCI. This means you don't need an open PCI slot on your HTPC or even an open USB port. Even better, you have the flexibility of putting your HDHR anywhere in the house where there is a network plug open. You can either hook up the HDHR in the basement near your CATV amplifier, or in the loft for best DVB-T antenna reception. Like this you always get the best signal possible. The HDHR can tune unencrypted Digital Terrestrial TV (DVB-T). In most European countries, there is a large choice of unencrypted digital channels available. Some of them broadcasting in HD. The HDHR is a dual tuner. It has one coax antenna input and an internal splitter to support both tuners on a single antenna.